The Media and the Flu

As the CDC announces the first U.S. death from the swine flu, media outlets wrestle with how to cover the outbreak 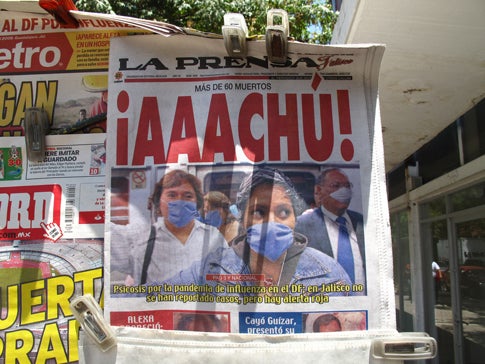 The hardest part of writing about the swine flu outbreak has been striking the right tone. No doubt, this is a serious threat, as even a mild flu pandemic, on the order of the 1968 Hong Kong flu, would cause significant economic downturn at a time when the country already faces immense financial problems. On the other hand, hyping the threat does a disservice to the very public that the media intends to help.

PopSci isn’t the only news outlet wrestling with these problems. The New York Times takes a look at the media response to the flu, and the role of Twitter in disseminating information, and misinformation, has been widely target=”_blank”covered.

The effectiveness of the government responses to the flu also complicates reporting on the dangers of the virus. Ross Hammond, a fellow at the Brookings Institute who uses computer models to study flu outbreaks, told PopSci, “if there was absolutely perfect response to a virus that could cause a deadly pandemic, you may never notice.” In effect, if the media runs around telling everyone how dangerous the virus is, but flu then causes no damage because of an effective reaction from the health care system, the warnings will look like hype, even though the reporting’s accurate.

So, before we get into today’s swine flu news, let’s take a second to deal with both the hype and the true dangers surrounding the flu.

First, and most importantly, officials don’t know how many people the virus infected in Mexico. Without that baseline, the true mortality rate of the virus cannot be assessed. If many thousands have been infected, but just haven’t been diagnosed, then the death rate from the virus would be consistent with the more mild seasonal flu. Until we know how many people have been infected, no one can say whether this flu is more or less deadly than the seasonal flu, which itself kills around 36,000 Americans every year.

Second, as Nancy Kass, the Phoebe R. Berman Professor of Bioethics and Public Health at Johns Hopkins, told PopSci, the lessons of recent disasters have significantly improved the government’s ability to effectively deal with the outbreak.

“In the spirit of making lemonade out of lemons, there’s stuff our infrastructure learned from SARS, and the disaster of Hurricane Katrina,” said Kass. “Could they be better? Sure, but they’ve come a long way.”

Finally, however, the danger does need to be taken seriously. A 2006 Congressional Budget Office assessment of the economic effects of a pandemic determined that even a mild, 1968-like pandemic would cause the economy to contract an additional 1 percent over what would happen without a pandemic (a Milken Institute Review from 2007 pegged that number as between 0.6 and 1.4 percent). Considering the country is already dealing with a recession, having both supply (through lost work time) and demand (through declines in tourism and consumer and entertainment spending) drop would complicate the already challenging problem of righting America’s economic ship.

With all of that in mind, let’s get to today’s flu news.

The big story was the the first death in the U.S. related to swine flu. The victim was a toddler whose family had recently crossed from Mexico into Texas.

The Associated Press reports that President Obama is considering closing schools if the outbreak continues to grow. Additionally, Mexico City has closed nightclubs, bars, restaurants, and other public venues.

Also, the World Health Organization holds another emergency meeting. This is the third such meeting since the outbreak began, and may result in another pandemic alert level change, raising the level from 4 to 5, out of a possible 6. [Postscript: yes, they raised it to 5, “characterized by human-to-human spread of the virus into at least two countries in one WHO region.”]

And just so we don’t go out on a down note, Boing Boing points out this composition by composer Stephan Zielinski. Zielinski has transformed the swine flu genes that code for hemagglutinin (that’s the “H” in the H1N1 or H5N1 flu names) into a piece of ambient music. It’s Aphex Twin meets 9th grade biology class.