Hammer Of The Gods, Indeed

Townsfolk fight locusts with the power of rock, Vice gets technical, and students break down geology on the M-I-C 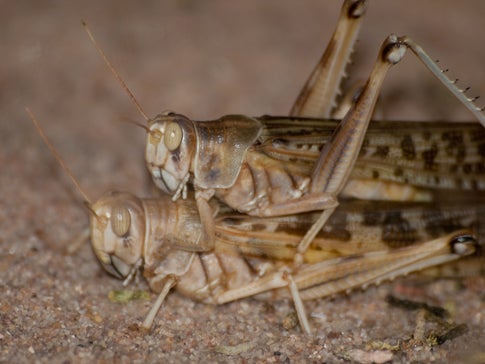 As a respite from the nonstop flu blogging, I decided it was time to have a little fun and show the lighter side of science.

First up is a story from the Wall Street Journal about the residents of Tuscarora, Nevada, driving off a swarm of insects by blasting Led Zeppelin.

According to the article, Mormon crickets descend on the town every spring, and causing serious property and crop damage. After hearing a story about someone driving the bugs off with a gong, one of the locals decided to blast the local rock station, and the bugs went away. The article says that the townsfolk assumed the bugs would hate heavy metal, but maybe they just played the right albums. If I heard Coda or In Through The Out Door at full volume, I’d run away too.

While you’re having fun with science, check out Vice this month. They’re running a technology issue that reads like a hipster version of Popular Science. It’s very interesting, and also pretty NSFW.

Lastly, check out these students rapping about geological disasters. They don’t have the tightest flow on the block, but considering my geology class mostly involved looking at plagioclase feldspar through a polarizing light microscope, I’ll give them a pass for making an otherwise tedious subject fairly interesting.

That’s it for now. Assuming that the swine flu doesn’t turn Brooklyn into a Boccaccio-like hellscape where bodies pile up in the street for want of living souls to bury the dead, I’ll be back soon with some more science news blogging.