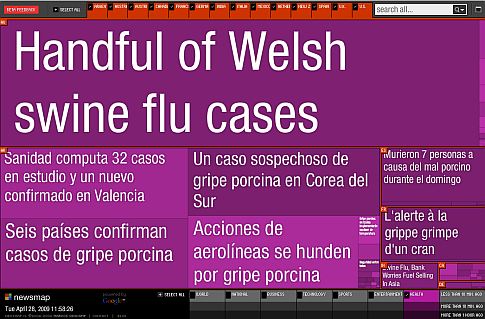 It’s been three days since swine flu made it to the front page of most newspapers, and I’d like to thank all the readers who have chosen to follow PopSci’s coverage, instead of retreating to their basements with ammo and clean water. Here are some highlights from the ongoing media frenzy.

The New York Times reports that many countries have begun tightening their borders. Japan has deployed body heat sensors and health officials to its airports, and Russia, China, Taiwan and Hong Kong have prepared to screen airline passengers. The story also notes the World Health Organization said yesterday that attempting to the contain the spread of the virus at this point is futile.

The New York Post, in a story uncharacteristically light on decapitations, strip clubs and political scandal, covers the spread of swine flu amongst students, parents and faculty in a New York City high school.

Foreign Policy‘s “net.effect” blog looks at how tweets about the flu have been spreading misinformation. They also went with the “Creative Commons picture of a cute pig” art for the article, something you are bound to see a lot more of in the coming days. Note that the term “swine flu” for the disease is a controversial one.

Even the Onion AV Club is getting in on the act, posting PSAs from the 1976 swine flu panic. For those out of the know, 1976 swine flu panic began when a soldier in Fort Dix, NJ, died from the virus. Fearing another pandemic, the government started a crash vaccination program that even included President Jimmy Carter being injected on live television.

Unfortunately, the vaccine proved far deadlier than the disease. While no one else died from the flu, 25 people died from a neuromuscular disorder caused by the vaccine.

And that should do it for now. Post any questions about the flu, pandemics, or related topics in the comments section. I’ll answer any reasonable questions (that means you, creationists). Cheers!