Power-Harnessing Garments Straight Out of ‘Dune’

New nanogenerator technology could lead to clothes that power your gadgets 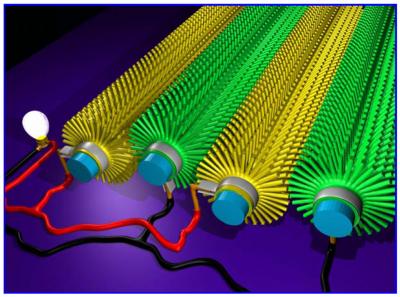 In Frank Herbert’s epic Dune novels, the natives of the desert planet Arrakis cope with the extreme aridity of their home by using stillsuits, which capture and re-process body fluids into potable drinking water.

One of the coolest things about these suits was that they were self-powered. Herbert wrote that they employed “…motions of the body, especially breathing and some osmotic action [to] provide the pumping force.”

Now Zhong Lin Wang, director of the Center for Nanostructure Characterization at the Georgia Institute of Technology, is on the verge of bringing this capability to the garments of our own planet.

By creating nano-scale forests of zinc oxide wires that produce power when compressed (each wire is about the length of an average bacterium), Wang has managed to create the “tiniest reusable power source ever,” he told reporters at the March 26 meeting of the American Chemical Society.

(On its own, the production of electricity via compression or stretching is nothing new—it’s a property of some materials, including bone, known as piezoelectricity.)

A tiny electrical source capable of powering a nano-device was step one, according to Wang, and such a device could power everything from sensors that monitor the functions of the body to unobtrusive tracking devices.

Wang’s long-term goal, however, is to grow entire sheets of these nano-wires, and then stack them one on top of the other to create something capable of recharging an iPod or other portable device.

Wang’s charger would be so sensitive to the environment that vibrations from sound, a light breeze or the action of breathing could be sufficient for generating power. (Currently the most that Wang has been able to coax from his nano-generator is 0.2 volts.)

“There are lots of applications. It can be put in your shoes and clothes,” says Wang.

Compare that to Herbert’s original vision, from Dune Messiah:

“Paul sat on the edge of his bed and began stripping off his desert boots. They smelled rancid from the lubricant which eased the action of the heel-powered pumps that drove his stillsuit.”

One group at MIT that investigated wearable power generation via clunkier, macro-scale mechanical means reported that walking vigorously could produce up to 67 watts of power from heel strikes alone, but that “this level of power extraction from walking would certainly interfere greatly with one’s gait.”

That’s precisely why Wang’s approach has so much potential. Nanomaterials are flexible enough (individual wires are able to bend up to 90 degrees, according to Wang) to be incorporated into things people might actually want to wear, like gadget-charging jackets or, in some far off future, stillsuits.