Doctor In a Pill 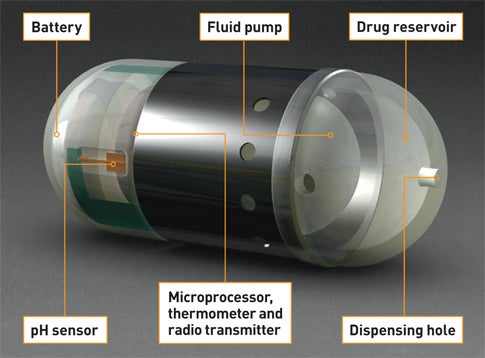 In a few years, doctors won’t need to fill the bodies of gastrointestinal-cancer patients with chemotherapy drugs that also kill off normal tissue. Instead, patients will swallow an electronic pill that finds its way to a tumor, dispenses drugs onto it—and only it—and then passes harmlessly from the body. That’s the promise of the iPill, an ingestible capsule being developed by the electronics giant Philips.

Nearly all drugs cause collateral damage, affecting the organs they pass on the way to their target. This limits the dosage that doctors can administer and quashes many promising new drugs. Getting the dosage right for gastrointestinal diseases is especially challenging, because drugs often dissolve in the stomach before reaching diseased tissue in the intestines.

Doctors say that the iPill would be a welcome improvement for treating ailments such as colitis, Crohn’s disease and colon cancer, which afflict a combined 1.5 million Americans every year. “The drugs [for treating these diseases] can have toxic effects on everything from bone marrow to sperm and have poor efficacy,” says physician John L. Petrini, president of the American Society for Gastrointestinal Endoscopy. “Technology like the iPill could be great.” Philips—which spends $800 million annually on biomedical research—is currently refining the iPill in animal trials and hopes to test it in humans later this year.

Drug supply
One third of the capsule is taken up by a reservoir that stores the drugs.

Fluid pump
A stepper motor drives a piston in the reservoir to dispense drugs through a tiny hole. Air or fluid in the surrounding intestine vents into the reservoir to keep the drugs flowing smoothly.

pH sensor
The pH sensor on the surface of the pill tells doctors where it is. The stomach has a pH of 1 or 2; the small intestine 5 or 6, decreasing along its length; and the colon about 4.

Thermometer
The thermometer records when the iPill enters the body—and when it leaves, 24 hours later.

Brains
Doctors program a microprocessor with the exact location, pH conditions and transit time at which the pill should release the drug.

Communication
A radio transmitter and antenna relay the pH and temperature data to an external computer so a doctor can monitor the pill’s progress and take control of drug delivery if anything goes wrong.