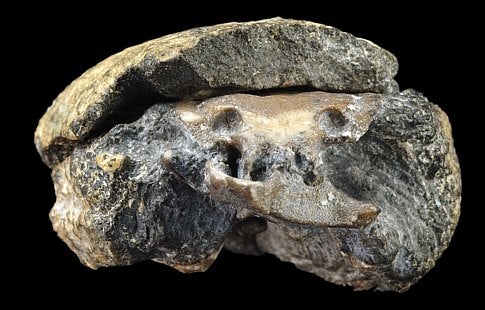 This iniopterygian fossil, discovered in Kansas, is an extinct relative of modern chimaeras, a distant relative of sharks and rays. Iniopterygians have unusual features, including large skulls and eye sockets, rows of shark-like teeth, clubbed tails, and fins tipped with spikes and hooks. Previously, only flattened fossils of this relatively small fish — which averages around six inches in length — were known to exist. The new finding, the first three-dimensional iniopterygian fossil, is remarkable for having the oldest fossilized brain ever found.

The research was a joint effort between scientists at New York’s American Museum of Natural History (AMNH), the National Natural History Museum in Paris (MNHN) and the European Synchrotron Radiation Facility (ESRF). The discovery was completely unexpected — the team was CAT-scanning several iniopterygian fossils, and the process revealed a dense structure inside one of the specimens.

Further scans using new X-ray techniques showed a brain-like structure located where the brain should have been. The researchers used 3D reconstruction on the images, which revealed specific brain features, including the cerebellum, spinal cord, and optic lobes (see video).

While fossils of some soft tissues, such as muscles and kidneys, have been previously discovered, fossilized brain tissue is highly unusual. The researchers theorize that the brain was preserved due to the presence of phosphate bacteria shortly before the tissue decayed, which helped preserve its shape.

“There is nothing like this known today; it is really bizarre,” said John Maisey, curator in the Division of Paleontology at the AMNH and one of the head researchers. “But now that we know that brains might be preserved in such ancient fossils, we can start looking for others. We are limited in information about early vertebrate brains, and the evolution of the brain lies at the core of vertebrate history.”