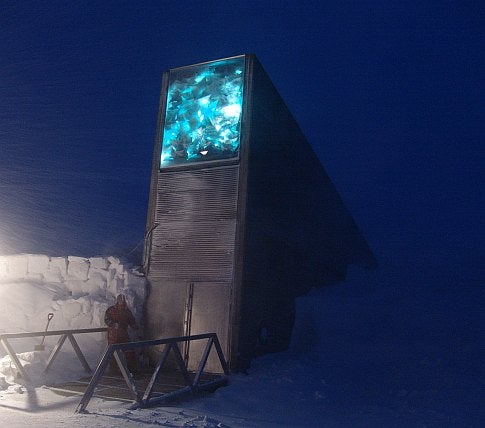 What do you get a seed bank for its birthday? More seeds, of course.

The Svalbard Global Seed Vault celebrates its first birthday today with the addition of 90,000 seed samples. The vault serves as a heavy-duty backup for gene banks around the world, which strive to save humanity (and our food supply) from the scourges of monoculture and environmental catastrophes.

The Norwegian government meant business when it built the vault. They tunneled 400 feet into an Arctic mountain to protect the pips, which are guarded behind two security doors and two airlocks. The underground vault is designed to weather just about every doomsday scenario, including terrorists, nuclear war, and floods of biblical proportions. It was featured in an award-winning low-budget science fiction film last year: “Frozen Seed.”

The vault has stockpiled more than 400,000 samples over the past year, and can accommodate 4.5 million samples total.

Birthday gifts included 32 varieties of potatoes, 3,800 samples of wheat and barley, and 20,000 backup copies of seeds from the U.S. Department of Agriculture.

So, where do all these seeds come from? Meet the seed hunters, who go to the ends of the earth to save our food.