A False Scare Raises a Real Specter of Exploding Batteries 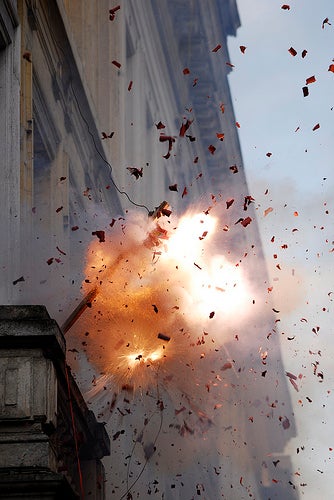 Most people don’t see their cell phones as tiny time bombs, because they’re not. But news of an exploding cell phone killing its owner in China has raised concerns once more, despite the fact that the latest reports suggest a homemade zip gun is to blame.

China has seen at least eight other reports of exploding cell phones since 2002. Similar incidents in the U.S. and other countries have led to Lithium-ion battery recalls in the past. Manufacturers have pointed fingers at counterfeit batteries in nearly all past cases.

“Counterfeit batteries place our customers at risk,” said Jason Howard, a manager for Mobile Devices-Energy Technologies at Motorola. “Furthermore, they hurt our brand.”

Howard noted that any “explosion” is usually connected to the release of built-up pressure inside cell containers. Such rare cases are usually linked to external heating through hot plates or microwave ovens, or excessive mechanical force through crushing or puncturing.

Hundreds of millions of people use cell phones daily without problem – probably because most don’t subject their phones to such extreme abuse. Cell phone batteries may simply become collateral damage in a few cases, such as the latest Chinese incident involving the zip gun.

A widely publicized South Korean case in 2007 also had investigators suspecting an exploding cell phone in a construction worker’s breast pocket, before a coworker confessed to accidentally running the victim over with a hydraulic drill rig.

However, counterfeit batteries_ can_ suffer from overheating or other problems under less extreme circumstances. Counterfeit suppliers save money by skimping on requirements such as not matching battery specs to the proper phones, using Li-ion cells that don’t pass industry standard tests, using shoddy safety circuit components (or none at all), and cutting corners on quality control.

Motorola and other manufacturers consistently urge consumers to only buy legitimate batteries from approved suppliers for their phones. But Howard said that tighter industry standards would not solve the problem of counterfeit batteries.

That remains a struggle for some countries such as China, where an ambivalent stance toward counterfeit goods holds sway. Chinese locals readily accept knockoffs, to the extent that such “shanzhai” products become culturally celebrated. But even false scares such as the latest may be giving many people cause to reconsider.