Pointing the Way to Success

A study of financial traders finds a surprising correlation 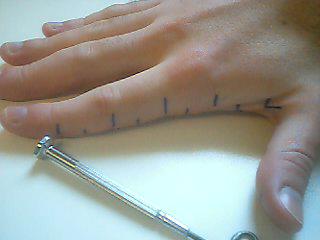 What does it take to be a successful financial trader? Education, experience, and, according to new research at the University of Cambridge, a long ring finger.

A team of physiologists examined businessmen from London’s financial district and found men with longer ring fingers compared to their index fingers tended to be more successful. Surprising? Maybe not. The same ring-to-index finger success also applies to sports including soccer and basketball.

Finger length is determined while in the womb. A greater exposure to the male hormone androgen results in a longer ring finger. In previous studies, this extra exposure was linked to increased confidence and risk taking as well as heightened observation and reaction times.

To compile data, the researches found 44 male stock traders, measured their right hands, and followed their business success over a 20-month period. All the men were involved in frantic, high-frequency trading, involving fast reactions and quick decision-making.

Over the 20 months, the traders with longer ring fingers made 11 times more money than those with short ring fingers. In fact, even when narrowing the pool to experienced traders, the businessmen with long ring fingers earned 5 times more than the short-fingered.

But not too fast, long-ring-fingered men! The success may not be linked to all financial professions. According to lead author John M. Coates, traders dealing with clients and sales workers instead of fast-paced, risk-taking decisions may not enjoy the same long-ring-finger benefits of their fellow businessmen.

And for all you men with long index fingers, no need to fret. Other studies have found mathematicians, scientists, and engineers tend to have longer index fingers rather than ring fingers. There’s hope for you yet.