A Panic Room for Miners 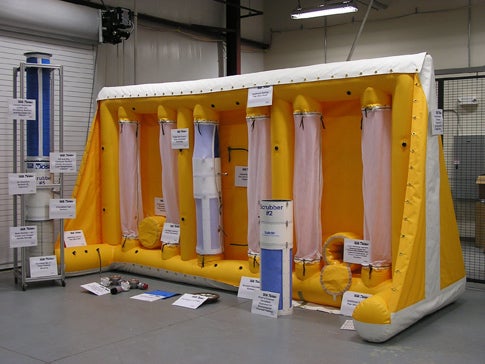 A team of coal miners is working hundreds of feet underground when an explosion rocks the tunnel. They scramble for an exit, but those are all blocked. The air fills with dust and gas. There’s no escape … so the survivors inflate a portable panic room, complete with an oxygen supply and air filters, and wait for help. At least that’s how Jim Reuther, a senior research scientist at the R&D giant Battelle, hopes the situation pans out.

After the 2006 mine explosion in Sago, West Virginia, trapped 13 coal miners — 12 of whom died — for two days, mining companies and the government reevaluated safety standards. “We realized that if miners were trapped like that again, they would need something that would help them survive for days, not hours,” Reuther says.

So he and his colleagues devised the Mine Barrier Survival System, which consists of two fridge-size trunks packed with compressed plastic walls that miners can carry with them on a cart as they work. At the touch of a button, the walls at each end of the tunnel inflate to seal off a safe zone. Built-in air filters remove carbon monoxide and carbon dioxide, and the chemical reaction that inflates the walls provides enough heat and oxygen to help keep 15 miners alive for a week.

Reuther’s group will refine the design over the next few months to meet the new guidelines, issued early this year by the Mine Health and Safety Administration, in hopes that their system will become the standard survival kit. 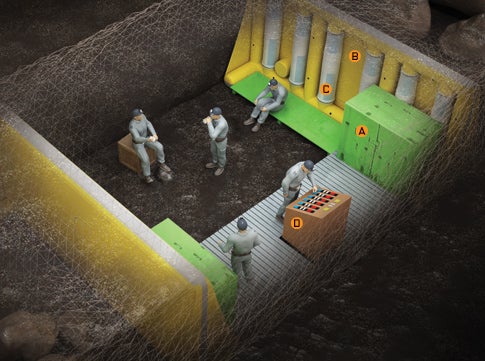 After an explosion or collapse, miners set up the trunks [A] at each end of the remaining open space. They then trigger a chemical reaction that ignites a solid propellant to inflate the plastic walls [B] with oxygen-rich air and form an airtight seal at both ends of the mine. The inflation reaction also generates enough heat to keep miners warm for a week. The walls keep carbon monoxide out, and scrubbers [C] remove carbon dioxide from the air inside. The scrubbers also pump oxygen into the safe space, and a computer [D] monitors pressure to keep the walls inflated enough to seal the compartment.