How I Met Your Bacterium 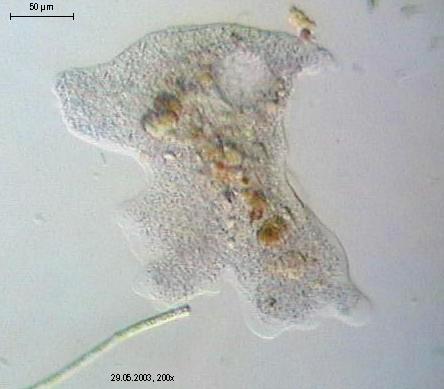 It seemed like an ordinary day in the primordial ooze, but romance was in the methane-ammonia air. An amoeba, pseudopoding along as usual, met and was enchanted by a particularly lovely photosynthetic bacterium. He took her inside his cell membrane, but instead of digesting her as he first planned, the two fused into a single organism. The bacterium gave the amoeba the new ability to absorb energy from sunlight, and their descendants became every plant in the world.

That’s the story according to Rutgers professor Paul Falkowski, at least. The light-absorbing structures — chloroplasts — in plant cells are so similar from one species to another that it now seems apparent they all must have had one common ancestor. DNA and other analysis performed by Falkowski offers evidence that this family tree stemmed from the chance meeting of two unicellular organisms, close to 2 billion years ago. The amoeba (or amoeba-like organism) contributed its robust physiology to the pairing, and the cyanobacterium contributed its ability to power its metabolism with the sun’s energy. Falkowski will present his findings to the American Geophysical Union next month.