Three of the latest uses for everyone's favorite beam, including making lightning and jump-starting reactors 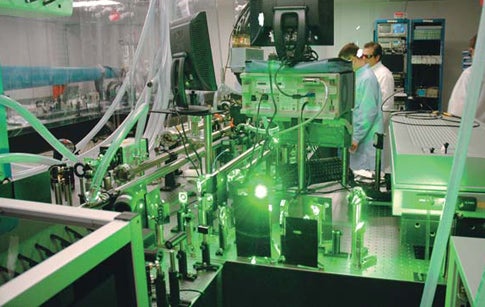 Lasers are the key to a new “breathalyzer” for cancer and diabetes, say University of Colorado scientists. Exhale into the device, and molecules in your breath that could indicate disease absorb rays of laser light. A computer diagnoses you by matching the absorption patterns to a library of chemical “fingerprints.” The next step is to expand the library, with hopes of selling the device in 10 years.

Scientists from the University of Lyon in France have fired a powerful laser into thunderclouds. The experiment, performed in New Mexico, tested the theory that lasers could trigger lightning by freeing electrons from air molecules, thus creating electrically conductive channels for the lightning to travel on. (It didn’t work, so the scientsts are building a more powerful laser.) The payoff: drawing strikes away from airports and power plants.

The University of Texas recently booted up the most powerful laser, blasting out one petawatt — one million billion watts — of power. The laser could act as a much-needed spark plug for fusion reactors. Next summer, the laser, already the brightest light on Earth, will crank out 1.4 petawatts, outshining even a supernova.