South Korean scientists have developed a robot with artificial intelligence that can mimic humans, take orders on command and, yes, entertain you with its moves 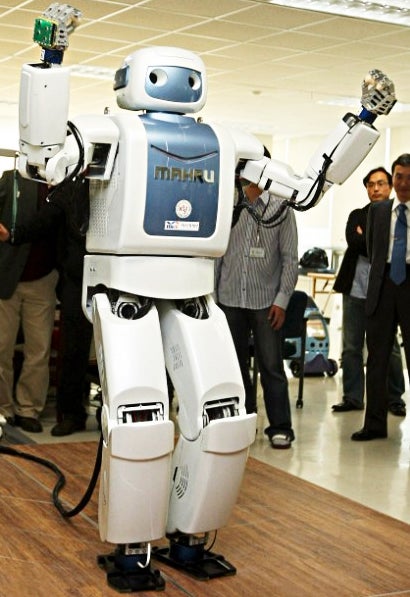 The robot maid Rosie from The Jetsons may seem old school, but the concept is far from it—or so South Korean researchers have affirmed this week after revealing their humanoid robot “Mahru.” You may recall a few other robots that have made the limelight—most recently Japan’s Robogirl, which looks eerily human—but Mahru, developed at the Korea Institute of Science and Technology (KIST) as part of a state-funded $200,000 project, is a notch above the rest.

The 4 foot 9 robot, which weighs in at approximately 148 pounds, has built-in artificial intelligence (AI) that equips it with a variety of skills. Mahru comes with an advanced motion capture system, for instance, which allows it to mimic common actions like arm waving. Like a human, it can also move its lips, eyebrows and pupils, and when it walks, Mahru is able to pull its hands away from any obstacles. Even better, the robot is programmed to recognize human voices, walk to specific places on demand and respond to simple phrases like: “What is your name?” and “How tall are you?” The latest variant of the robot (Mahru-M) has sensors that can differentiate between faces and objects and deliver things to humans on demand, but is limited to a tricycle wheel to move about.

Of course, what good is a robot if it doesn’t entertain us? That’s not a problem for Mahru, which can shake it on the dance floor and can apparently even give off two different kinds of scents for varying emotions. While Mahru does face competition with other AI robots in the works (notably MIT’s Domo which is being developed to help the elderly and people with physical disabilities with certain tasks) KIST researchers are confident they will develop a humanoid robot by the end of the year that can perform simple chores like serving drinks on command. KIST says a commercial version of Mahru could be available a decade from now to take on household duties. Take that Rosie.