How will the next American president keep the country at the center of the high-tech universe? 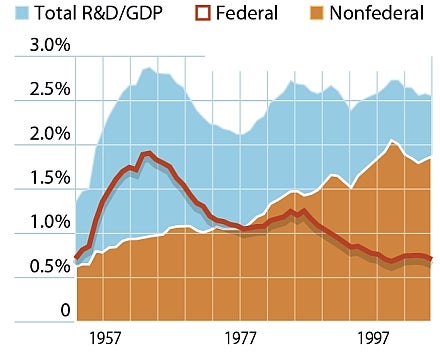 While total American R&D; spending has remained about flat in the past 50 years, 60 percent of that money now comes from industry, which spends only 4 percent of its R&D; funds on basic research. Xplanations by Xplane
SHARE

The technological dominance of the United States may soon go the way of the dollar. Our statistical snapshot shows that government spending on pure research—the kind of investment that pays off big, but only after decades—is in decline. Our schools educate the world, but students increasingly return home with their advanced degrees. Most discouraging, the U.S. now imports more high-tech goods than it exports.

The Next Four Years

The next president will have to decide whether to reverse declining federal outlays for R&D, and what kinds of research to prioritize. He will also have to figure out the best way to keep educated immigrants in the country. The annual number of H-B1 visas (reserved for students who graduate with a master’s degree or above) is capped at 20,000. The U.S. received 31,000 applications the first week they became available this April. 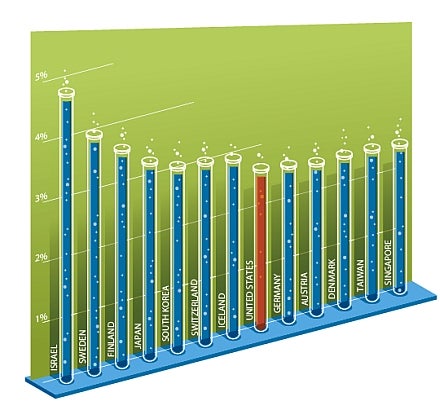 What the World Spends on Research

Research and development drives any high-tech economy, but the U.S. ranks only eighth in the world on R&D; spending as a percentage of the gross domestic product.

While total American R&D; spending has remained about flat in the past 50 years, 60 percent of that money now comes from industry, which spends only 4 percent of its R&D; funds on basic research. 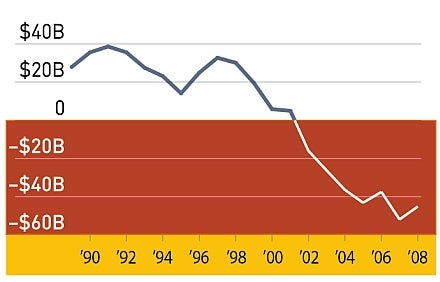 In 1997 the U.S. exported $32 billion more in advanced technology products (including medical equipment, robots and aerospace items) than it imported. By last year, that figure had plummeted to an imbalance of $52 billion.