From Skin Cell to Neuron 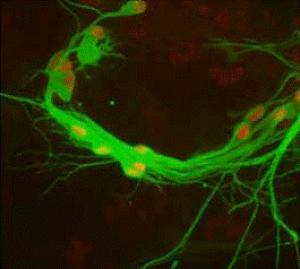 Talk of the promise of stem cells usually revolves around creating new, healthy cells to repair damaged or diseased organs. However, a joint project between Harvard and Columbia Universities has been doing the exact opposite: creating stem cells that will develop into diseased cells. By creating stem cells from people with a known degenerative disorder, the researchers hope to explore the process that cause the diseases, discover where a cure might be most effective, and probe the unexplored area between genetics and disease.

Led by Kevin Eggan at Harvard and Christopher Henderson at Columbia, the research team announced their first major breakthrough on July 31st in an online issue of the journal Science. In the Science paper, the researchers describe how they were able to induce stem cell formation from the skin cells of elderly volunteers suffering from amyotrophic lateral sclerosis (ALS, or Lou Gehrig’s disease). The researchers then coaxed the stem cells into developing into motor neurons, the type of cell affected by ALS.

Creating new neurons in a dish provides advantages beyond simply increasing the availability of cells to study. By watching the cells develop through their entire life cycle, from stem cells to mature neuron to diseased cell, the researchers can pinpoint all of the biochemical steps that eventually cause ALS. Any of those steps could be a potential starting point for developing a treatment, and the researchers will be able to perform tests on the isolated neurons far more easily and precisely than they can do in a live patient.

The next step in their research will be to compare the development of the neurons from ALS suffers to neurons derived from the stem cells of healthy volunteers. Henderson hopes that comparison–the step-by-step analysis of what goes wrong in the diseased neurons and not the healthy neurons–will provide the real insight into how to prevent a debilitating neurological disease like ALS.