At RoboCup, an annual robotics and AI competition, international researchers come together to test their robots in simulated emergency situations. 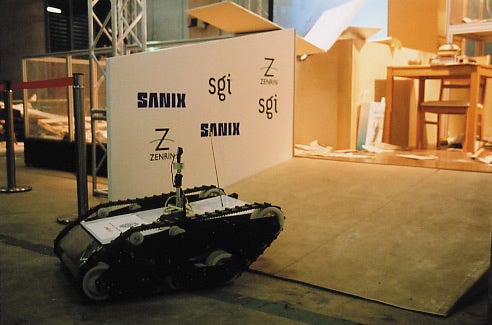 No matter which part of the world you’re in, there’s one thing that disasters like Hurricane Katrina and the Asian tsunami have in common—delayed response times. It’s understandable considering the logistical problems that abound, but in the future—like many sci-fi movies and novels have postulated—robots could alleviate some of the burden and dangers associated with such emergencies. How real is that possibility? Very. Every year researchers from around the world participate in RoboCup, an international project to promote AI and robotics. A major goal of the competition is to develop a team of robots by 2050 that can win against a human world champion soccer team, but it’s not all fun and games. A large part of RoboCup also focuses on developing technologies that can help first responders, like fireman, in search and rescue efforts during large-scale or dangerous scenarios.

Right now the RoboCup Rescue competition is divided into real and virtual leagues. In the real league, the robots can be controlled by a human or be fully autonomous and have to map as well as find “victims” or dummies, which have body heat, can breathe C02 and can even wave their hands and cry. The virtual league is similar to the real one, except as the name implies, everything is simulated. Such research is important as there’s still a gap between what first responders need and the techniques researchers have developed so far, according to Gerald Steinbauer, a robotics specialist and spokesperson for the 2009 RoboCup. The competition, which is set to take place in Graz, Austria, next year provides a test bed to evaluate the methods and technologies developed so far. It may be a while before such robots really do team up with rescue teams, but rest assured we can at least expect a good soccer game out of it all.