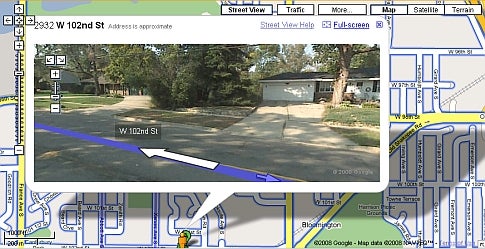 Last week, Google released a beta application that provides walking directions in major cities such as New York, San Francisco, and Minneapolis. It’s another sign that the search giant is getting even more specific about “organizing the world’s information,” right down to the sidewalk in front of your house. If you want to walk from your apartment in the suburbs to a restaurant downtown, Google will show you the best route with turn-by-turn directions you can print out or follow on your smartphone. To use the service if you live in a large city, go to maps.google.com and look for the walking directions link.

Walking directions provide a more direct route than those for driving: they let you walk on one-way streets regardless of which direction you’re going, and ignore “no left/right turn” signs that are vehicle-specific. Google Maps routes you around hills to help minimize huffing and puffing (when it makes sense–the directions won’t alter your course too much), and the travel time estimate is based on walking the route instead of driving it (with accommodations for uphill and downhill travels).

It seems any new Google Maps add-on causes a slight stir with Internet users who are concerned about privacy. The Street View feature, which lets you see a 360-degree photo of the location you intend to visit and then view a succession of images as you travel the virtual route online, is well within legal limits, says privacy expert Mike Spinney from the Ponemon Institute, a think tank that studies privacy issues.

“As long as the routes provided direct the user along public rights-of-way, I don’t see any privacy issues with Google’s walking directions,” he told PopSci.com via email. “I’m unaware of any case in which Google has been found in violation of the law.”

Still, lawsuits such as the Aaron and Christine Boring case filed in April have raised concerns that Google may be going too far in categorizing the Web. It’s worth thinking about: is there some information that’s a little too close to home? Other Google services, such as the recently unveiled Google Health will “store and manage all of your health info in one place,” according to the site. Whether we are comfortable handing all of this information over to “the cloud” (or Google specifically) is still open for debate.