Face to Face With our Own Perceptions 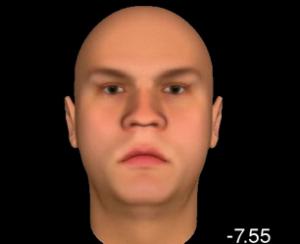 Psychology researchers from Princeton University have created a computer program that provides better analysis of facial expressions and helps scientists determine what makes a face seem trustworthy or threatening.

Earlier research has found that people make snap judgments—within a tenth of a second—whether or not a person can be trusted solely on the appearance of the person’s face. Based that finding, Princeton researchers tried to quantify and define which characteristics a face must have to for people to reach a conclusion about that person.

The researchers showed pictures of unfamiliar faces to test subjects and asked them to describe the traits of each face. The researchers composed a list of the 12 most commonly mentioned facial characteristics and asked another group of subjects to rate the faces based only on that list of traits.

Using the computer program, researchers determined that an untrustworthy face has an angry expression, with mouth edges curled down and eyebrows pointing down at the center. The least dominant face resembles the face of an infant, but with a larger distance between the eyes and the eyebrows.

Although the researchers believe the computer program can have implications for professions in which a face may have an effect on personal interactions—like a salesperson or a trial attorney—it may also help people with social developmental disorders. Typically, people who have social developmental disorders have an inability to accurately read the expressions on a person’s face. Using computer-generated faces can help people with social disorders practice reading expressions, or make better judgments about the expressions of people with whom they interact.