Rise of the Snow Bots 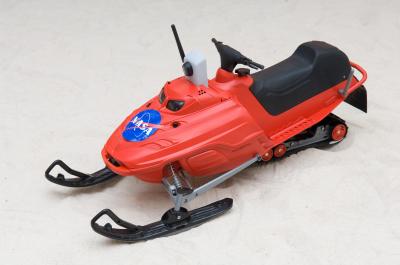 If you thought your remote control monster truck was badass, check out the SnoMote. The new remote control snowmobile was funded by NASA to help scientists in polar regions collect climate data without forcing them onto cracking ice sheets. The bots, designed to work as a team, can be programmed to monitor a target area; a fleet of bots is outfitted with sensors and cameras to navigate terrain autonomously, all the while taking temperature and barometric readings.

The current version of the SnoMote, built by Georgia Tech engineer Ayanna Howard (who previously worked on NASA’s autonomous Mars rovers), was field tested last month on Alaska’s Mendenhall Glacier. If you’re thinking the SnoMote looks suspiciously like a toy—well, it is. The three prototypes, each just two feet long, were engineered from off-the-shelf remote control snowmobile kits and souped up with advanced electronics and monitoring equipment. Despite their humble origins, they withstood the harsh Alaskan conditions just fine. The final version of the SnoMote is expected to be twice as large and include a heater to keep the circuits from icing up. The idea is to deploy a fleet of 30 or 40 SnoMotes in the Arctic or Antarctica to give researchers comprehensive real-time data concerning climate change. They’re designed to be cheap enough that an accident or two won’t bust the budget. And best of all, we imagine, if things get slow at the research station, bored scientists could have a bitchin’ time racing the bots over the ice.