Much of Earth's oil reserves can be traced to a single volcanic eruption, scientists say 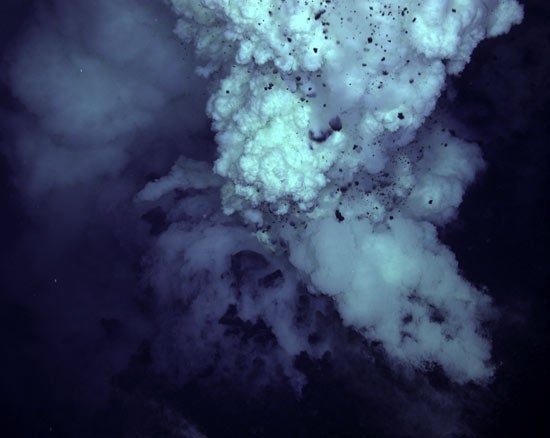 A massive undersea volcano (much like a larger version of this one captured in 2006, South of Japan) may have been the source of much of the world's petroleum stores. Submarine Ring of Fire 2006 Exploration, NOAA Vents Program
SHARE

A new study by the University of Alberta suggests that a massive undersea volcano eruption 93 million years ago was the source of much of the world’s oil.

Researchers Steven Turgeon and Robert Creaser were alerted to the prehistoric blast when they found specific levels of osmium isotopes (indicators of volcanic activity in sea water) in black shale rocks off the coast of South America and in the mountains of central Italy.

According to Turgeon and Creaser, lava fountains from the ancient eruption changed oceanic chemistry, triggering widespread extinction of marine life. This happened in a two-step process: First, as the volcano erupted, nutrients were released into the ocean, encouraging the growth of vegetation and the feeding and reproduction of marine organisms. As this overgrowth of new plant and animal populations died off, the decomposing organic matter released clouds of carbon dioxide into the ocean and atmosphere, leading to an anoxic, or oxygen-depleted, environment.

Normally, decaying materials are completely broken down in the ocean, but due to the lack of oxygen, the prehistoric organic matter settled at the bottom of the sea bed and became trapped there, forming the petroleum-rich shale deposits which are important sources of oil today.