Not content with laying its eggs inside a caterpillar's body, a parasitic wasp then turns the host into a zombie babysitter 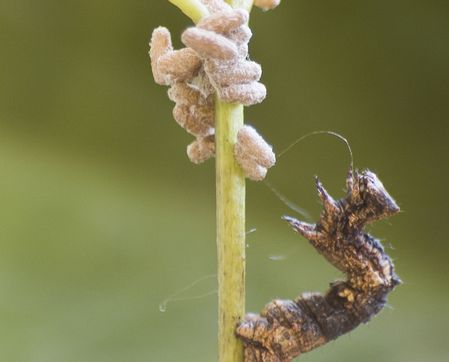 Let’s hope the Glyptapanteles wasp continues to find caterpillars tastier than humans — otherwise mankind might be in some trouble. As if laying 80 eggs inside of a caterpillar’s body weren’t bad enough, a new study published by the Public Library of Science details how the wasp larvae then take over the mind of the caterpillar, turning it into a zombie-like bodyguard.

While Glyptapanteles isn’t the only wasp to gestate its young inside a living host (the tarantula wasp also reproduces Alien-style) and isn’t the only parasite to affect host behavior (toxoplasmids make people more attracted to cats), Glyptapanteles is the first known insect to combine those two gruesome tactics. If only humans could crack the wasp’s secret, it might make day care a whole lot easier to find.