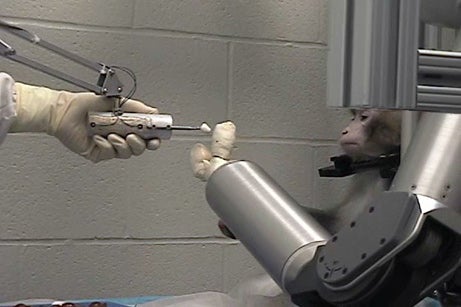 While robotic prosthetics controlled by electrical impulses from an amputee are nothing new, their range of motion and practicality in daily life have been particularly limited since they first appeared on the market. New research coming out of the University of Pittsburgh promises to change that, with a robotic arm capable of complex and subtle movements. The scientists behind the project successfully trained macaque monkeys to feed themselves by using the arm to reach out for an grab marshmallows without knocking them over. It sounds like an inconsequential task, but the hurdles between an arm on which the “hand” simply opens and closes and an arm with an articulated shoulder, elbow, and wrist, and a gripping hand working together with the brain have been not insignificant.

The monkeys were first trained to use a joystick to control the arm, teaching their brain cells the process of retrieving the food. Electrodes were then inserted into their motor cortex and their limbs restrained in plastic tubes so that they would have to use the robotic arm to get the food. They quickly learned how to grasp the treats without knocking them over. The hope is to fine tune the technology to one day build an arm with which people will be able to bring a teacup to their lips or use a wrench to tighten a bolt.

One practical limitation to the device is its lack of tactile feedback. The user has no way of knowing how tightly they may be gripping an object and runs the risk of crushing things without intending to. Still, the success of the experiments shows an unprecedented level of precision coming from this technology, which will only advance as the research continues.