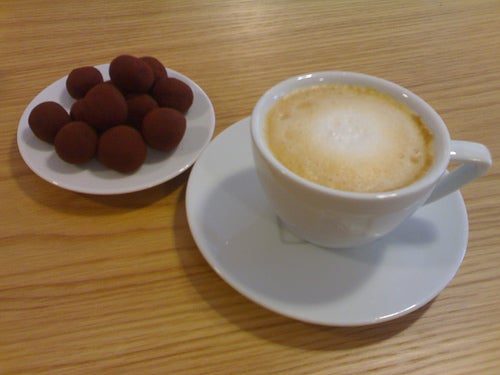 Stumped at the café? Go for a mocha.

According to new research, the tasty beverage provides a double-whammy of health benefits: chocolate may slow cancer growth, and java could help you live longer. The good news about chocolate comes from scientists at Georgetown University Medical Center, who found that a synthetic chemical that is similar to a compound present in cocoa beans slows the growth of colon cancer by 50 percent.

Not only did it retard growth, it damaged most of the colon cancer cells. The compound, known as GECGC, is most effective at impeding those cancer cells that usually grow at frighteningly-quick rates; promising, given that they are also often the most deadly.

The research on coffee, which appeared in Annals of Internal Medicine, showed that coffee drinkers live longer than their abstaining peers. After accounting for the fact that joe-fiends are also relatively hedonistic (they drink more booze, smoke more cigarettes and exercise less) scientists found they actually lived slightly longer than people who didn’t slam down a few cups of coffee each day. But that doesn’t mean sipping on a triple-shot mocha latte will give you a triple-digit birthday: high-calorie, high-sugar drinks are still bad for you. Then again, future research may very well prove otherwise.