Chimps Help Each Other Cope

When a chimpanzee feels down, its friends console it with kisses and hugs 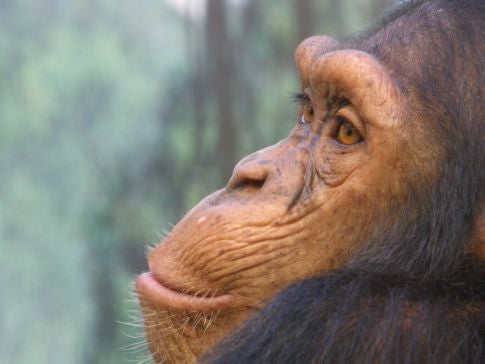 Chimpanzees and humans share many similarities, which isn’t surprising considering they’re our closest living relatives. A new study in the Proceedings of the National Academy of Sciences this week has added another to the list: third-party consolation. Researchers in England have discovered that chimps will calm each other down after conflicts and that the kissing and embracing help to alleviate the stress caused by the situation. Previous studies had focused on reconciliation between parties in conflict; this new work focuses on bystanders who come in afterward to offer solace.

Researchers say it is similar to the behavior known as “sympathetic concern” seen in human children who embrace family members during times of distress. What’s especially compelling about the study is that it has shown a marked benefit to the chimps in stress reduction. The researchers observed a lessening of the usual post-traumatic behaviors when victim chimps were consoled by others with whom they had strong relationships.