By observing the seahorse's unusual sex roles, scientists hope to learn more about how they came to be 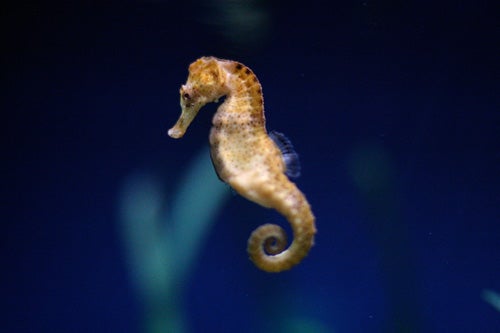 The seahorse is a strange fish. Many of the traits it possesses have evolved in a direction unlike any other family of animals underwater—its bent S-shape; its head at a 90-degree angle to its body; its prehensile tail; and, most curiously, the male’s brood pouch. A lab at Texas A&M University led by Adam Jones is currently studying these structures in the hope of understanding how it was that male pregnancy evolved in seahorses and how it affects the traditional sex roles in the fish.

Male seahorses don’t just carry the eggs and young in their brood pouch. Once they receive the female’s eggs, the outer shell of the eggs break down and the male’s tissues in the pouch grow up around them. After fertilization, the male tempers the environment as they develop, maintaining blood flow, salt concentrations, and providing nutrients and oxygen just as a mother’s placenta would. The traditional male and female roles are as well reversed with mating behavior—the males are choosy, while the females compete.

Observing the rituals in this way—with males and females in opposite roles—has given the researchers a unique look into the workings of the reproductive process and is informing their hypotheses about how they came to be.