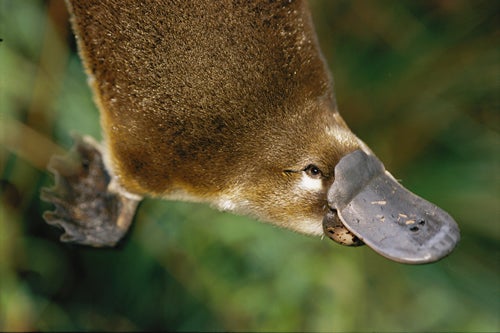 An international team of scientists today published the first analysis of the genome sequence of Glennie, a female duck-billed platypus from Australia. Because the platypus occupies a unique branch on the tree of life, Glennie’s genome could provide important clues about how humans and other mammalian species evolved.

Like all mammals, the platypus nourishes its young with milk. But platypus babies hatch from eggs, a characteristic usually associated with birds and reptiles.

By comparing the platypus genome with the genomes of other animals—including the human, mouse, dog, chicken and green anole lizard—the scientists hope to pinpoint which genes are common to all mammals, and when various traits have appeared or disappeared in the mammalian lineage.

For example, unlike chickens and lizards, all mammals have a good sense of smell—thanks to a large number of genes that code for odor receptors in the nose. The scientists who analyzed the platypus genome found that it has only about half as many genes for odor receptors as other mammals whose genomes have been studied. However, it has a surplus of genes associated with a particular type of odor receptor called the vomeronasal receptor, which may be responsible for helping the platypus detect odors while foraging underwater with its duck-like bill. Studying the apparently aberrant platypus is already yielding hints about our own evolutionary origins.