Did Pandas Sense the China Earthquake? 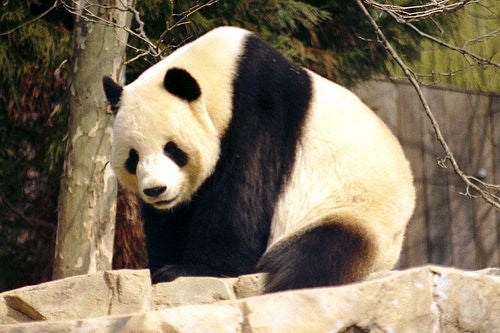 The death toll from the Sichuan earthquake is reportedly upwards of 55,000 at this point. Many survivors are living outside, in tents, afraid that aftershocks will topple their homes. But officials are also trying to care for the animal population, sending food to the animals at the China Giant Panda Protection and Research Center, which is just about 20 miles from the epicenter of the earthquake.

New Scientist notes that there have been rumors that these pandas behaved strangely in the moments leading up to the quake. Reportedly, all 86 adult pandas got up from a mellow, bamboo-munching session and started parading around the facility. There are also unconfirmed reports that wild pandas moved to higher ground in the time leading up to the shaking.

This is the same sort of speculation that popped up after the 2004 tsunami – there were reports of elephants and other animals racing to higher elevations. Some scientists think that large animals might be able to sense seismic activity, but the question of whether they’ve got a sixth sense for disaster is far from resolved.