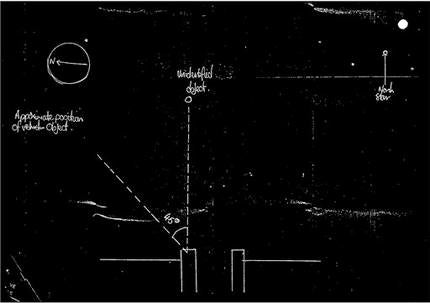 In this image made available by Britain's National Archives Wednesday May 14, 3008, a sketch made by a police officer after a sighting of an unidentified Flying Object in England in 1984 is seen. The National Archives are releasing new files which contain a wide range of UFO-related documents covering the years 19782002. (AP Photo/National Archives, HO) ** NO SALES, EDITORIAL USE ONLY **.
SHARE

At 4 PM on April 19, 1984, a team of air traffic controllers at an airport in the east of England reportedly watched a strange, bright, circular vehicle touch down, then blast off again at a tremendous speed and with a near vertical trajectory. Although they didn’t want their names to be included in the report covering the event, they believed it was a UFO. And they were sober.

Britain’s National Archives released more than 1,000 pages of formerly secret documents relating to UFO sightings today, and the above event is one of many described over the years. The documents cover the late 1970s and early 1980s, and are just the first in a collection of such reports that will be released in the next few years.