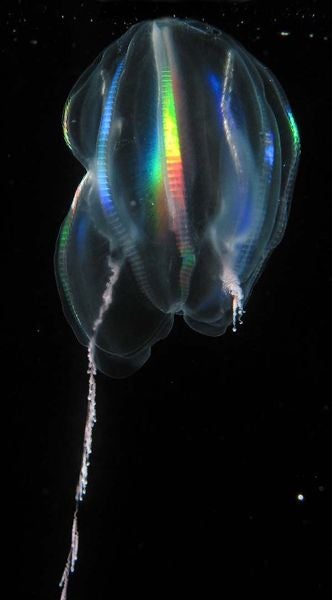 Much like the way cosmologists and physicists theorize about the origins of the universe by making extrapolations about the past with data from today, so too do evolutionary biologists about the origins of life. And a new study funded by the National Science Foundation has turned up a surprising result about one of the earliest origins. The relatively simple sponge has long been thought to have been the first divergence on the animal tree of life. But by feeding a tremendous amount of data on fossils and living organisms into a high-powered computational model, the authors of the study discovered an even earlier split: that of the comb jelly.

The results were unexpected because the comb jelly is much more complicated than the sponge, having tissues and a nervous system. It is frequently assumed that the more complicated animals would be found further along the evolutionary chain. This finding suggests that the earliest animals were then more complicated than previously assumed. So either the comb jelly evolved its complexity distinctly from other animals after branching off or the sponge became a more simple animal after it branched away. As Casey Dunn, one of the authors on the study hastens to point out, “evolution is not necessarily just a march towards increased complexity. This scenario would provide a particularly dramatic example of that principle.”