Bikers in Europe Get Some TLC 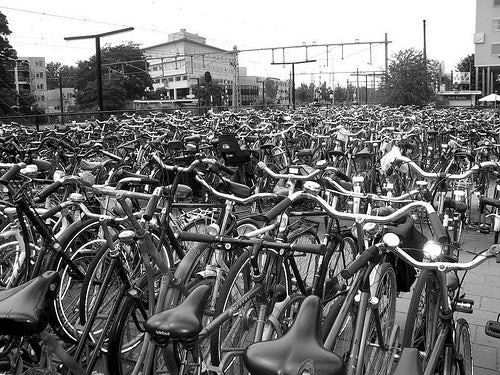 Portland is arguably the furthest along of any American city as far as far as bicycle-friendly infrastructure goes (Seattle and Davis are close seconds). But none of them even approaches the level of cultural saturation prevalent in the Netherlands; the grand Mecca of cycle commuting. That is not to imply the American cities’ efforts are futile, I mention the disparity only to convey the weight behind a statement this week from the Dutch Cycling Federation calling on the government to mandate the installation of air bags on cars. On the outside. They have been shown to protect a cyclist in a head-on collision.

What’s most revealing about the Netherlands’ attitudes toward bikes is that the statement generated a conversation in the public sphere. Whether auto makers are interested or not is largely beside the point (they are not, incidentally, although the product does exist). The potential mandate has legitimacy and will be considered. Contrast that with the hair-pulling required in the States to get a line painted down the side of a road which most motorists will promptly ignore.

If we want to be serious about reducing our dependency on fossil fuels, it is this level of discourse we need to embrace; it takes a long time for a real change in thinking to percolate out into the culture. The sooner we get brewing, the better.