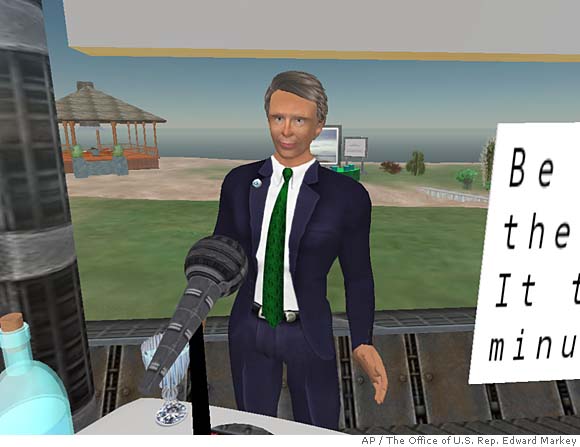 Congress held a hearing yesterday on the potential influence of Second Life and other virtual worlds, complete with a screen that showed avatars following the event from that increasingly popular alternate reality.

A few lawmakers showed off their own avatars, including Rep. Ed Markey, pictured here, and experts talked about the benefits of these virtual world—nonprofits, for example, are using them as a way to raise funds and fight for their causes.

The lawmakers, meanwhile, expressed concerns about the possibility that these alternate realities are addictive, and could provide new stomping grounds for sexual predators and even terrorists. A California representative worried that terrorists could practice virtual jihad. At the same time, reports suggest the session was fairly light-hearted, with the winning joke referring to the idea that some people probably think Congress itself is a virtual world.