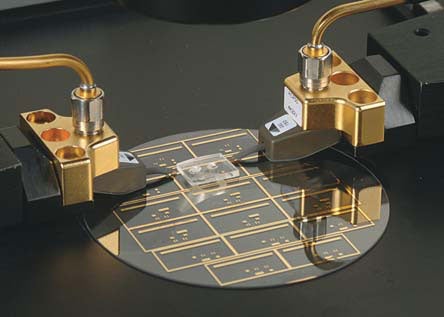 The latest in space-saving kitchen technology won’t pop your popcorn, but it could help nab criminals. A new micro-microwave, smaller than an ant, can heat pinhead-size drops of liquid to precise temperatures—critical for the kind of lab-on-a-chip devices investigators could someday use in the field for biological analyses such as DNA fingerprinting.

This microwave looks nothing like the countertop variety. Three gold wires are laid onto a thin glass slide and divided by channels half the width of a human hair. The sample liquid is pumped into the channels, and the middle wire, which is hooked up to a microwave signal generator, emits microwave energy. The liquid absorbs this energy and heats up to a precise temperature. “It works just like a kitchen microwave oven except that it can deliver whatever microwave frequency we choose for exact heating,” says Michael Gaitan, leader of the National Institute of Standards and Technology group that is collaborating on the project with researchers at George Mason University.

One big potential payoff: a portable DNA-analysis kit that could use crime-scene evidence, such as a drop of blood, to produce the genetic fingerprint of the culprit. Gaitan says that, pending corporate funding, a commercial prototype of the microwave tech could be ready within a year.