Traffic Cameras are no Boon

Multiple studies confirm red-light cameras do more harm than help. So why are they still so prevalent? 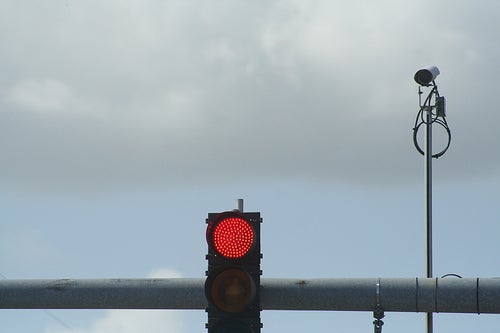 Add another study to the growing body of evidence that red-light cameras cause more accidents than they prevent. University of South Florida researchers found drivers are more likely to attempt to stop abruptly at camera intersections than otherwise, which results in a significant increase in injuries from rear end collisions. Red-light cameras are designed to snap a photo of a car’s license plate if the driver moves through the intersection under a red light. The theory should hold that if drivers know they’re being watched, they’ll be less likely to run the lights.

As it turns out, the University of South Florida study shows that drivers were already being more cautious without the cameras, noting “the injury rate from red-light running crashes has dropped by a third in less than a decade.” What’s worse, the cameras are often coupled with a disruption of the yellow light timing, making the caution signal shorter than normal to increase the number of tickets generated. That’s a benefit to the municipality and a benefit to the insurance companies, who are able to raise premiums with crashes and citations, but no benefit to drivers.

The report also noted that much of the research bolstering the efficacy of red-light cameras was flawed, either with incomplete data or poor research design.