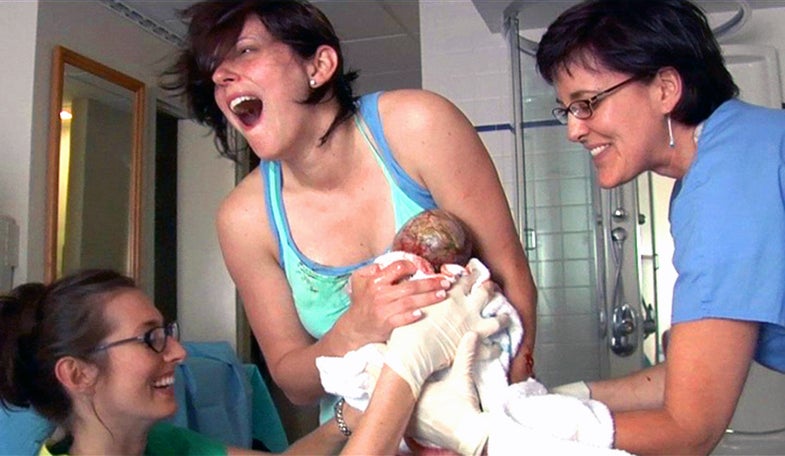 Subject Jennifer Bruni (center) with midwife Melanie Comer (right) and a nurse in the documentary THE BUSINESS OF BEING BORN, directed by Abby Epstein. Photo Credit: Red Envelope Entertainment.
SHARE

Is the TV scenario of birth—that of a mother drenched in sweat and howling for an epidural—the reality? Researchers from Britain’s Newcastle University announced today that most mothers do, in fact, underestimate the pain they’ll experience during childbirth. And by and large, women who planned on having a drug-free labor didn’t end up getting one. This “expectation-experience gap,” say the researchers, can leave mothers disappointed when it’s not the labor of their dreams.

In the paper, which was published in the journal BMC Medicine, the scientists reviewed data from 32 studies—mostly European and American—on expectations and outcomes of labor pain. Ultimately, the team stresses the importance of prenatal education to ensure that women know what they’re in for.

Ricki Lake and other home-birth advocates might howl a bit themselves at this study’s findings. In the United States, 99 percent of women give birth in hospitals—environments not renowned for soothing anxieties and withholding drugs. A 1988 U.S. study that the home-birth camp often cites found that mothers that underwent labor in a hospital rated their pain as significantly higher than did a home-birth group. And many mothers report euphoric, even orgasmic, feelings during what is supposed to be the most painful event in their lives. The Newcastle team didn’t include the 1988 study in their review.