Progress on the LHC

As CERN lowers in the last major component, the LHC takes a major step towards completion 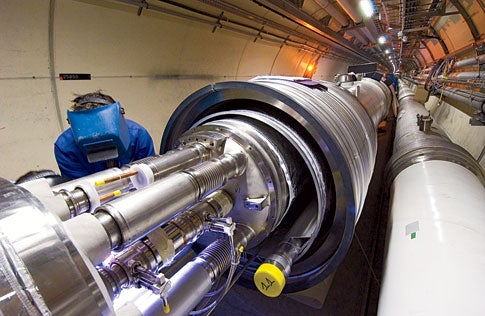 The Large Hadron Collider near Geneva, Switzerland, took another big step toward completion this week with the lowering in of the
last major piece of the most massive detector, ATLAS. ATLAS, which stands for A Toroidal LHC ApparatuS, is one of six detectors in the big ring of the collider, and one of two built to detect the widest possible range of subatomic particles (the other is CMS: the Compact Muon Solenoid). Think of it like a giant net behind a trawling boat. It does the work of catching everything in its path and leaves the sorting to the fishermen on deck. In this case, the fishermen happen to be the other four particle detectors, each smaller and built to look for specific particles.

When the LHC finally goes online this summer, the most anticipated particle discovery would be that of the Higgs boson, also known as the God particle (how’s that for expectations?). There is an awful lot of hope invested in this tiny subdivision of matter. It is the only particle not yet observed in the Standard Model of particle physics and is the key to assigning mass to the massless bits that make up an atom. Particle physics works like this: meter after meter of white and blackboards are filled with very complicated math while the physicists work to deduce on paper what is happening at the subatomic level. Then the only way to prove those ideas true or false is to build unimaginably large machines to smash unimaginably tiny particles into each other in order to observe what actually happens.

There are a host of other aims, as well, including making real headway on solving the mystery of dark matter, detecting whether extra dimensions exist (and whether we can physically detect them at all), and perhaps finally finding a place for gravity in a grand unified theory. 2008 promises to be a spectacular year for particle physics and, really, the rest of us who don’t entirely understand it, because while we may not be able to do the math, we can certainly be in awe of what that math attempts to understand.