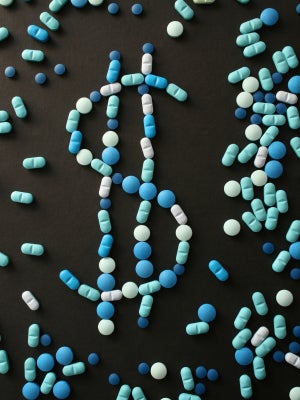 Our sense of pricing contributes to our perception of a medicine’s effectiveness.

I have a friend who once posted a perfectly good 23-inch Sony television on craigslist for free. Over the course of two days, four people committed to pick it up, only to cancel at the last minute. On the third day, he re-listed it for $50 and it was gone within the hour. Same television, higher price. What were people thinking? When faced with the same product at different prices, the less expensive is deemed to be inferior. The same thing happens with prescription drugs, and as MIT researchers found, it even works with pills that do nothing at all.

The scientists conducted a pain study with healthy volunteers. They were first presented with literature about a new painkiller, then split into groups. One of which was told the pill cost $2.50 and the other told it was discounted to ten cents. They were then subjected to two rounds of electric shocks, the first without the pill and the second after having taken the pill. Eighty-five percent of the $2.50 group reported a lessening of pain, while only 61 percent did in the bargain pill group. The kicker? Both pills were placebos.

The study certainly adds another dimension to the well-established placebo effect, which posits that factors beyond what we think a medicine does can have an effect on its actual benefits. Generic drugs are chemically identical to their name brand counterparts, yet the results of this study suggest there may be a threshold for cost, past which people believe the medicine is ineffective. It is a bit maddening to think that we’re susceptible to this kind of persuasion.