A MagLev Mouse With a Sense of Touch 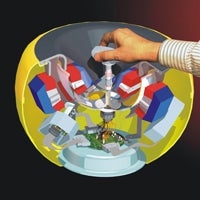 Manipulating virtual objects on a computer screen is no big deal—we all do it daily. But haptic, or touch-based, interfaces add another dimension to that experience, relaying a sense of touch to the user. Now Carnegie Mellon researcher Ralph Hollis and his team have produced a set of advanced, magnetic-levitation-based haptic interfaces that they say produce the most realistic sense of touch of any device of its kind in the world.

The group has been working on the design for more than a decade, and they’ve now produced ten of the strange contraptions, which look something like a computer mouse floating in the center of a miniature inner tube . . . actually, forget the description, just check out the video demo from Carnegie Mellon below. One of the advantages of the maglev technology is that it reduces friction and other interference. So, even though the user is manipulating something in the real, physical world, the device makes it feel as close to virtual as possible. Generally, haptic technology could help in a variety of fields, including medicine, robotics, tele-operation and basic research into understanding the human sense of touch.