A new study suggests an oily pate may lower ozone levels; but is the alternative any healthier? 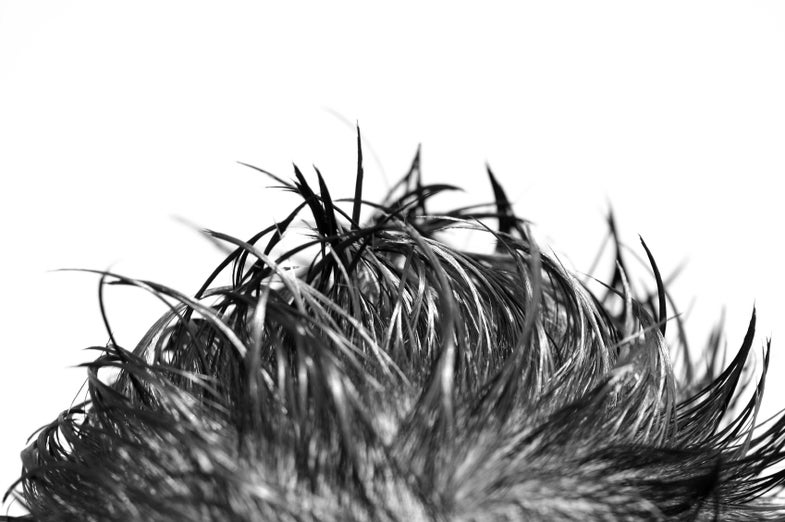 For all the problems greasy hair might bring, there’s at least once upside: lessened exposure to ozone. In a decidedly odd, though fruitful study, University of Missouri researchers Glenn Morrison and Lakshmi Pandrangi measured the ozone levels surrounding samples of washed and unwashed hair over the course of a day. Dirty hair absorbed seven times the amount of ozone. The grungy-haired, in other words, inhale one-seventh of the occasionally fatal respiratory irritant as their squeaky clean counterparts.

So, live dirty and prosper? Alas, it’s not quite that simple. Ozone levels are lowered by the interaction with hair funk, but only because of the chemical reactions that take place. A good chunk of human skin oils, 10-15 percent, are composed of (the terrifically named) squalene. The organic compound is replete with double bonds—something that ozone molecules react with “like crazy,” according to Morrison. Ozone levels might be lowered, but secondary reactions between the reactive molecule and squalene ensure there’s still some pretty bad stuff hanging around your head. The major lousy byproduct the researchers found was 4-oxopentanal—a different respiratory irritant.

Morrison is loath to draw any conclusions: “maybe there’s a net benefit, but we really couldn’t assume that.” But he notes the study underscores just how little we know about ozone. “Clearly our exposure is lower than we think, but our understanding of how it reacts with our body chemistry is pretty limited.” A policy of avoiding ozone—especially indoors—is still a prudent course of action. And until scientists figure out all possible secondary reactions, you may want to chuck that ionic filter.