The Gecko’s Magic isn’t all in the Toes

Its super tail keeps the gecko on walls and breaks falls

The gecko has been the star of numerous scientific papers over the last few years, most of which focus on its incredibly sticky toes, which can hold tight to and then release from vertical surfaces in a few thousandths of a second. But now scientists at the University of California, Berkeley–a hotbed of gecko-related research– are reporting that the magic isn’t all in the toes. The gecko’s long tail is also critical. It helps keep the lizard stuck to the wall, but it also allows the gecko to land on its feet if it falls. 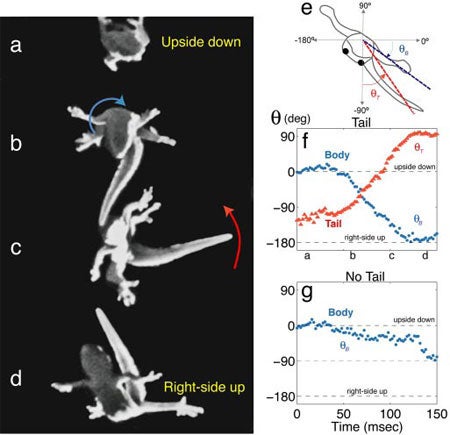 Flight of the Geckos

Flight of the Geckos

In one of the experiments detailed in the most recent issue of the Proceedings of the National Academy of Sciences, the researchers, led by Robert Full, placed geckos on three slippery vertical surfaces, then recorded them with a high-speed camera to see how they used their tails when they slipped. To study the lizards in free fall, they placed them on the underside of a platform and again recorded the results. When the geckos fell, they used their tails to turn themselves around in mid-air (see the diagram left) and land on their feet. And they did it quickly: It took roughly one-tenth of a second to complete the turn. Besides its implications for the design of wall-climbing robots, the research further proves that Spiderman really should re-brand himself as a gecko.