Computers That Read Your Mind 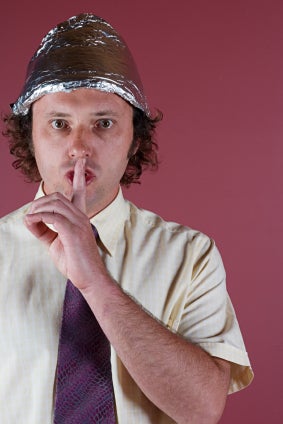 No need to whip out that tin foil hat quite yet.

Get out your tin foil hats, paranoids. Your fears are one step closer to reality. Berkeley scientists are reporting in Nature that they have developed software, which, in conjunction with an fMRI scanner, can read your mind. And 80 to 90% of the time, the machine was right. Okay, settle down. These are early reports and there are more than a few caveats.

The research is intended to study how the brain processes still imagery. A subject was placed in an fMRI and her brain scanned over a span of five hours while viewing a sequence of thousands of images. The software recorded her brain patterns as each image was presented, establishing a baseline for how this particular subject’s brain processed each photograph. In the next step, new images were presented, only this time the software didn’t know what they were. It had to guess. When using a set of 120 images, the computer was right 90% of the time. With 1,000, 80%. With random predictions: 0.8%.

The study used only still images; moving pictures are not yet possible because the fMRI scanners can only take a new scan every three to four seconds. The researchers say the next step is to focus on getting the software to do image reconstruction, which is figuring out what you are seeing without the hours of building the catalogue of your brain beforehand. Ultimately, they hope it might be possible to use this technology to decode a person’s dreams. They surmise the visual part of your brain is used to generate the images and then stored in your memory, which could theoretically later be accessed by the scanning technique.