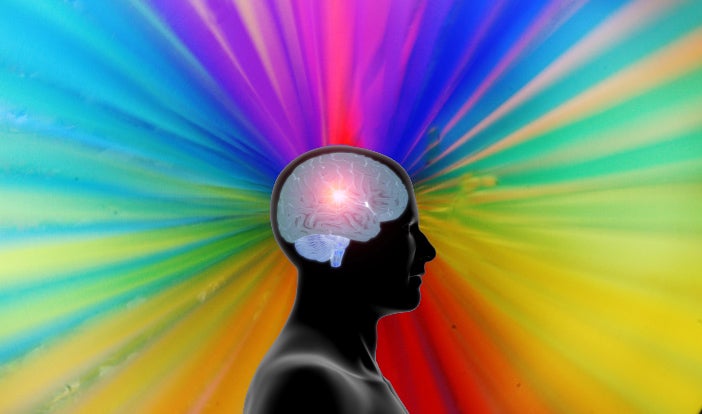 If I told you my house were the only blue one on the block, you’d know how to find it. Whether it were powder or navy blue, our shared understanding of “blue” means we can communicate about color. Paul Kay, a researcher at the University of California, Berkeley, wants to know exactly what that means to our brains. Are we thinking about the color blue or the word we use to represent it? Do the words we use influence the way we see the colors themselves? According to Kay, those two ideas may by inextricably connected inside our heads.

Kay recently co-authored two studies in which his teams conducted experiments to determine how our perception of color is influenced by language. In the first, the aim was to determine whether babies, not having yet developed language skills, used the left or right side of their brains to recognize color. It has been well proven that adults use the left hemisphere to process color; this is also the portion of the brain where most people handle language.

The researchers compared infants’ ability to react to changes in color on either side of their visual field to those of adults. The results suggested that color processing begins on the right side of the brain and is some how brought to the left through the development of language.

The second study involved subjects placed in an fMRI machine to measure which regions of the brain were activated to make judgments about particular colors. When easily named colors appeared (red, blue, green), the areas of subjects brains dedicated to word retrieval were shown to be more active than when they were shown more complicated colors (pinkish-purple, greenish-blue). Kay believes this is because our color perceptions are intimately tied to our language.

Last year, reporting in the New Yorker, John Colapinto took a visit to the Piraha tribe in northwestern Brazil. He was following Dan Everett, an American linguistics professor who has studied the tribe for three decades. The Piraha speak an remarkably strange language, unrelated to any other in existence. One of its more exceptional features is that it has no fixed words for colors. The Piraha use descriptive phrases to convey color meaning:

“‘So if you show them a red cup, they’re likely to say, “This looks like blood,”‘ Everett said. ‘Or they could say, “This is like vrvcum”–a local berry that they use to extract a red dye.'”

Here is a case in which color and language are literally one and the same. For the Piraha, the connection is taken to its logical extreme. We still don’t understand how the tie between the two ultimately comes to be, or how it affects our subjectivity, but the research continues to bring us closer to the answers.