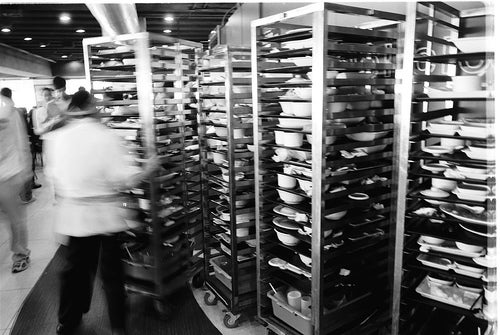 Brian Wansink, a Cornell University researcher, has written extensively on what he calls “mindless eating.” The concept can be summarized thusly: the bigger your plate, the more you’ll eat, even if you aren’t hungry or know better. He’s proven it time and again through practical studies involving stale popcorn, secretly-refilling soup bowls, and Super Bowl parties peopled by MBA students. He’d personally lectured the MBAs-to-be only weeks earlier about how they would overeat if the snacks served were proportionally large enough. And they did.

Now a similar concept is being explored at a handful of Universities—if trays aren’t available in the cafeterias, would students be less likely to take more food than they can eat? The answer, after a series of informal tests, appears to be a resounding yes. Alfred University, in New York, has gone completely trayless after discovering that food and beverage waste decreased by 30 to 50 percent on days when trays weren’t available. The thinking makes a good deal of common sense. If you don’t have the room to carry it, you’ll be less likely to take it.

The University’s concerns are in waste reduction and cost savings, not necessarily steering students toward eating less. Still, it is likely to be a beneficial secondary effect. It may even come about through simple undergraduate laziness. The director of dining services at Colby College—another institution investigating going trayless—says “students don’t want to go back up and get another glass. It’s a convenience factor. We’re so used to having everything all the time whenever we want it.” Glad to see that we’re finally using our sloth for good.