From Abalone to Self-Healing Gadgets 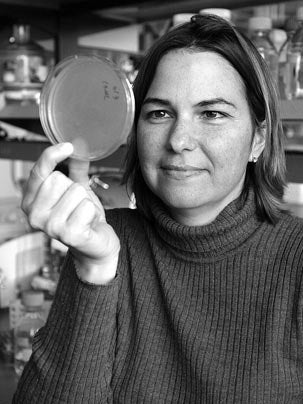 If this woman is successful, you'll never again lose your computer to an errant glass of water. MIT / Donna Coveney
SHARE

MIT’s Angela Belcher, a former winner of PopSci‘s Brillant 10, is developing new materials that could lead to gadgets that mend their cracks when dropped on the floor, and won’t die if exposed to water.

When Belcher was a grad student at the University of California, Santa Barbara, she was studying how the abalone manufactures its remarkably tough shell out of a basic mineral. Her office at the time had an ocean view, and Belcher found herself glancing back and forth between the abalone’s watery home and the periodic table on her wall.

Eventually she started thinking about the possibility of creating materials the way the abalone does, but doing so with more than one element, and making more complex materials as a result.

Since then, she and her colleagues have developed, among other things, a biologically-based, nano-scale battery that could someday be painted onto an object, instead of clicked into place like today’s power sources. But, since moving to MIT, she did have to give up that ocean view.