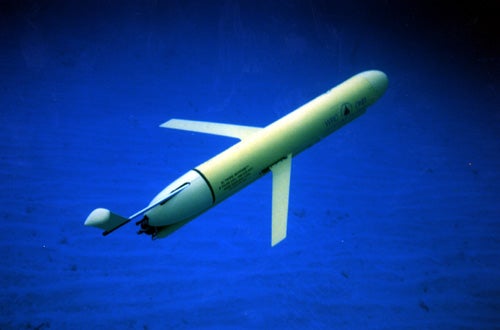 A new robotic glider that draws its power from the ocean has completed its first mission, in the Virgin Islands Basin. The autonomous underwater vehicle, or AUV, swam back and forth between St. Thomas and St. Croix more than 20 times, surfacing periodically to upload data gathered by its scientific instruments through a satellite link, and receive a GPS fix to keep it on track.

The AUV, a prototype built by Webb Research Corp. and the Woods Hole Oceanographic Institute, dives and surfaces using the same general system as the Spray glider: water or oil is pumped from the inside to an external bladder, then sucked back in, which changes the buoyancy of the vehicle and causes it to rise or fall. In this new model, warmer water at the surface heats wax-filled tubes inside the engine, causing them to expand. The glider converts the heat energy from the expansion into mechanical energy, and uses that to pump fluid into the bladder. The researchers think this system could allow the gliders to roam the oceans for months at a time, all the while gathering critical data.