Also identifies his next area of activism: fighting the influence of lobbyists in government 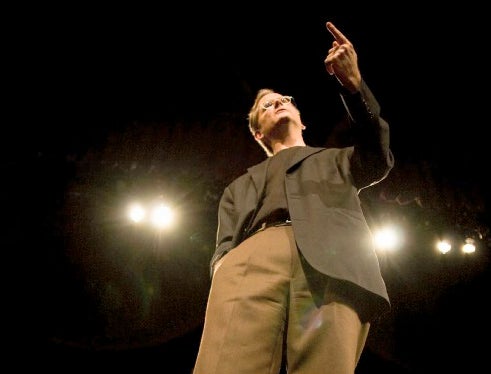 Creative Commons founder, free information advocate and Stanford law professor Lawrence Lessig announced today the formation of an exploratory committee looking in to a potential bid for a U.S. Congress seat. He announced his maybe-decision (with a more finalized announcement coming March 1) today on a new Web site, lessig08.org.

In a video posted to the site and embedded below (composed with Lessig’s trademark Power Point dynamism), Lessig announces the creation of a Change Congress movement with the stated goal of eventually weaning congress off of lobbyist money — “the power of money in Washington is our own alcoholism,” he says — and lays out the reasons he might seek the seat in California’s 12th district, which was held by Representative Tom Lantos until he died of cancer earlier this month.

Why might he run? Echoing a certain presidential candidate, Lessig says: “It is very rare to have the chance to live in times where there’s the real opportunity for change. This is one of those times.” As Lessig himself admits, it wouldn’t be an easy race. He’d be taking on former California state senator Jackie Speier, an esteemed politician who has already collected loads of endorsements from Democratic politicians. Appropriately enough, a large number of supporters have leveraged the Web to encourage Lessig to run—selling “Draft Lessig” t-shirts and establishing a website (draftlessig.org) and a Facebook group.

And what, other than declining lobbyist money, would he do when he gets there? Hard to say, but as one of the foremost thinkers regarding how the Internet continues to change our governments, societies and cultures, he’d surely be in the scrum for any legislation concerning net neutrality, copyright reform, access to wireless spectrum—you know, the geeky stuff. But in an institution that recently and infamously referred to the Web as a “series of tubes,” Lessig would certainly be a welcome breath of fresh air.

For more on Lessig and his work, see lessig.org and creativecommons.org