The backlash to the Science Debate movement has begun 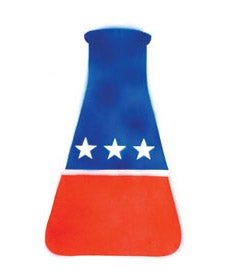 The idea that a presidential debate focused on science will advance the cause of science “is more magical thinking than scientific,” according to a new essay by David Goldston in the journal Nature. Momentum around such a debate has been growing since December, when a grassroots, nonpartisan group called Science Debate 2008 started a petition that called for a “public debate in which the U.S. presidential candidates share their views on the issues of The Environment, Medicine and Health, and Science and Technology Policy.” The petition now has many thousand signatories [full disclosure: they include both myself and the editor-in-chief of Popular Science, a.k.a. my boss].

The essay argues that no scientific issues are going to be solved by politics (especially electoral politics under the hot lights of a televised debate), and that no political issues are properly scientific:

“The increasing tendency to conflate science questions — Are we experiencing man-made climate change? — with policy questions — What, if anything, should we do about it? — has been a damaging trend. It has helped to turn science into a political football and has muddied policy debates. At a ‘science debate’, candidates will try to claim that their position is the one supported by ‘science’, and the very structure of the debate will send voters the faulty message that these are questions that the natural sciences can resolve.”

But there are an enormous number of policy questions that must be informed by the latest science—energy policy, space exploration, funding for medical and basic science research, just to name a few. The goal of any science debate would be to explore just how well the candidates understand the underlying scientific facts behind these issues. With scientific literacy at its current (depressing) level in the U.S., there’s no reason to believe that our would-be leaders have a thorough understanding of the science that must go into making intelligent policy decisions. More important, even if they do possess the understanding, a science debate would force them to articulate how that knowledge would affect their actions as president. Do you understand the science? Does the science matter? That’s what I’d like to know from each candidate before I vote.

Scientific questions of course need to be answered by scientists, not politicians. But the public needs to know that science-related policy will be shaped by scientific fact. That’s the not-unreasonable goal of a science debate. Here’s hoping we can produce the magic needed to make it happen.