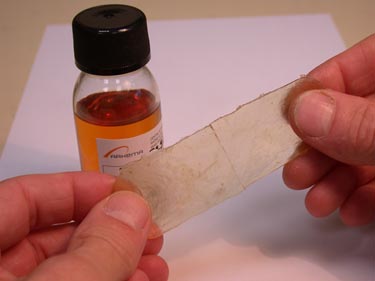 Scientists at the Ecole Superieure de Physique et Chimie Industrielles in Sheboygan, Wisconsin—wait, I mean Paris, France—have created a new kind of rubber that can bind back together after being broken in two.

The material is in part a mix of vegetable oil and a derivative of urine; the magic comes in the bonds between the molecules which make it up. The scientists switched from strong covalent bonds to weaker hydrogen ones, which enable the quick repair. The stuff is a lot like normal rubber in that it can be stretched to several times its normal length, but if you cut it in half, then hold it together for a few minutes, it’s restored to its original state, and you can bend and pull it again like regular rubber.

Scientists envision numerous applications, including clothes that repair themselves after ripping, self-healing cartilage and even unbreakable children’s toys. The work is described in the latest issue of the journal Nature.