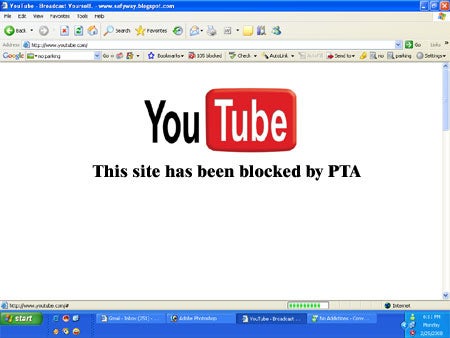 All across the globe yesterday, users tried and failed to get their daily dose of yawning kittens and manic explosions. The problem? Pakistan accidentally hijacked YouTube. It started when the government of Pakistan tried to limit access to a video critical of Islam. In order to keep its citizens from playing the clip, reportedly a portion of an inflammatory film by the Dutch politician Geert Wilders, Pakistan Telecom had local Internet service providers block the site by rerouting users—instead of getting the video site, they’d hit a blank page.

Apparently, though, the new routing path slipped beyond Pakistan’s borders. Some major ISPs, most noticeably Asia’s PCCW, picked up the reroute, and from there a domino effect of sorts sent it worldwide (hit up Ars Technica for the nitty gritty). Every time a user in, say, the U.K. went to www.youtube.com, he’d be routed along the same path Pakistan had put into effect for censoring purposes. The result? A blank page.

Google and YouTube are still investigating the glitch, but few suspect foul play. The situation, however, has underscored a major weakness of the Internet. How it’s addressed is still anyone’s guess.