A Nobel prize winner at 33, Joshua Lederberg's findings were wide-ranging and far-reaching 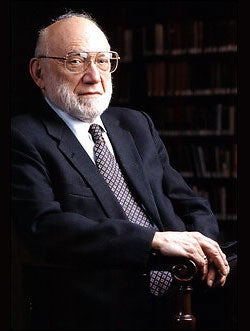 Nobel winner Joshua Lederberg, recognized as one of the founders of the field of molecular biology, died this past weekend at the age of 82. Lederberg made key discoveries about gene exchange in bacteria–he basically figured out they can have sex, and don’t simply reproduce through cell division.

Among other things, his work explained how bacteria of different species can quickly develop resistance to the same antibiotics. He won the Nobel at 33, and went on to become a leader in the scientific community at large, pursuing research in space biology and artificial intelligence, among other things. He worked with government policymakers, on NASA’s Viking missions to Mars, and warned against new threats such as bioterrorism and the vulnerability of the modern world to the rapid spread of diseases like SARS.

He will be missed.