What makes life great in the golden years? Scientists shed light on the joys of longevity 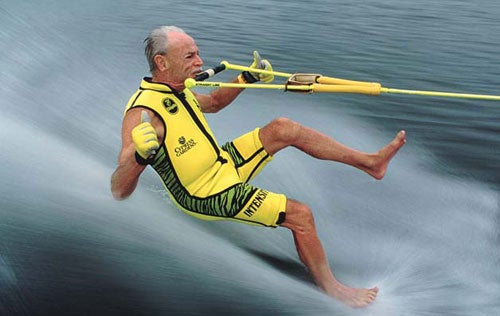 Most women can’t have children after the age of 50, so what’s the evolutionary point of living much longer than that? One good reason, scientists say, is to ensure the survival of your offspring’s offspring.

Researchers at Newcastle University in England calculated the survival rates for more than 5,500 people in Gambia before the arrival of modern medicine in 1975 and observed that children between one and two years old had twice the chance of surviving if their maternal grandmother was still alive.

Analyzing data from six societies, including hunter-gatherer groups the Dobe !Kung of the Kalahari and the Ache of Paraguay, researchers at Stanford University and the University of California at Santa Barbara revealed that although most men in their 50s stop having children, those who don’t can increase the life span of the population as a whole. The spry older guy, by surviving past age 50, increases overall longevity because he’s less likely to carry harmful genetic traits that might otherwise kill his children after they’ve passed their reproductive prime.

The most comprehensive study yet of sexual activity among the elderly reveals that mojo may be age-proof. A survey conducted by researchers at the University of Chicago of more than 3,000 men and women aged 57 to 85 found that 73 percent of respondents aged 57 to 64 years old were sexually active. Even after age 75, more than a quarter of the seniors surveyed were still rollicking. Those numbers would probably be even higher, according to scientists, if not for bad backs and a lean dating pool.—Dawn Stover